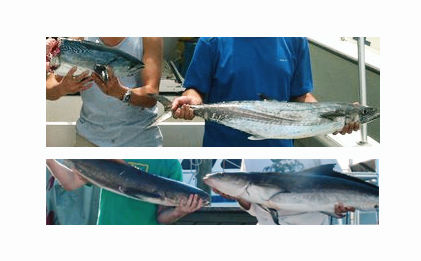 A few years back I get a booking for a full day deep sea fishing adventure through a travel agent. She explained that it was going to be 4 Chinese businessmen that don’t speak a lick of English but they were hiring a translator to come along for the day. She was very concerned that I was patient with beginners because they had never fished before. I am always up for a challenge so I said no problem. I assured her we get beginners all the time and actually beginners typically do very well because they take instruction easily. The language barrier might be tough but with a translator we should be golden.

The day of the trip comes and I have everyone aboard the boat. I explain where all the safety gear is and a few boat rules. I also explain the game plan for their day of deep sea fishing. Translator does awesome relaying the message and we are off to the fishing grounds offshore from Port Canaveral. We start our day out live bait trolling. As I am setting the second line out and it gets sky rocketed by a nice king. I’m telling the translator what to tell the guys and in mid translation THE DEMON gets him and his head is over the rail calling dinosaurs. THE DEMON is what we call it when customers get sea sick. The translator is now worthless other than making dinosaur calls and providing a good chum slick. I continue showing the guys how to fight the fish to the best of my ability given our language differences and they are shaking there heads up & down. I hand the rod to the first guy up and he is doing okay on this first fish, until the fish gets close and runs under the boat. I try to quickly get him to lean the rod over and then I try to take the rod but its too late, the fish has already got the line into the prop and its over. Five minutes later we have our next shot. This time for whatever reason the guy pulls the free spool lever back in mid run. Fish is gone and that reel is now out of commission. The next fish the guy is yanking so hard that he pulls the hook. (This guy would have made a great vertical jig fisherman.) This goes on and on. We continue to loose fish from not reeling, reeling to hard, thumbing the spool. You name it, it happened.

Noon rolls around and the bite shuts off. After having about a dozen or more fish hooked up, we are only holding 2 & a half king fish and 1 bonito. Half a king fish because of course a barracuda had to take his shot at me too. I make a few short moves but the bite is done. I’m trying to explain why the fish sometimes quit biting and go over some options for the next style of fishing we can try. The translator is telling them something but I had a feeling that all he is telling them is that we need to go back. I come to the conclusion after talking with the translator between dry heaves that we are going to call it an early day and head back to Port Canaveral.

On the ride in I am looking out the window scanning the ocean like I always do and I see one of my favorite sights, a big manta ray barging the surface. In fact I see several manta rays barging the surface. I grab one of the jig rods and tell the guys when I hand it to them to just reel keeping a tight line. I am also making the motion. They shake there heads up and down once again. Now keep in mind all this has to go right in a hurry. Yes I see several manta rays but unfortunately they are right in the path of every charter boat and small boat heading back to Port Canaveral from a day of fishing. It will get crowded in a hurry. I line up on the ray, make the cast and instantly hook up a decent cobia. Show them once again what to do and once again heads shake up and down. I hand them the rod and quickly grab the other spinning rod. I run to the bow of the boat to make the cast and instantly hook up on another cobia. I walk the fish to the back to hand off the rod and all I see is the guys facing one direction while the line is totally draped across the boat the other direction. I couldn’t begin to explain how that is possible but needless to say that fish is gone. I make the reel motion again to get them to reel the loose line in and once again I am fighting the current fish I have hooked up showing them what to do. Once again all heads shake up & down. Luckily the other rod still has the jig and so far they seem to be doing okay with this second fish. I see another ray within casting distance of the boat so I run to the front and again instantly hook up a nice fish. This one looks to be a little better than most, it is in the 40lb plus range. I walk the fish to the back of the boat and now they are holding the handle of the reel that is no longer attached. For some reason they decided to start reeling the other way and it totally came off and yes that fish is gone. I still have this bigger fish hooked up. I am laughing at this point and say to the guys. “you don’t understand a word that I am saying do you?” Once again they shake there heads up and down but they are laughing. I think because I am laughing and they realize how comical the situation is.

At this point, I somewhat seriously yell up to the translator that he has to get up and talk these guys through this fish. He manages to get up. I am explaining how to fight the fish while I am fighting the fish and the translator is saying everything word for word. I reluctantly hand the rod off. The guy does pretty good as I am coaching along and the translator is doing his job. Hallelujah we manage to get this nice cobia. By now we do have one more boat on the scene and others are coming. We did manage to catch 2 more cobia. We also managed to loose several others but it was a great way to end a day.

This was one of the most frustrating and comical days I have ever experienced. To all my Chinese customers that want to go deep sea fishing in Port Canaveral, Cocoa Beach. I will try to brush up on my Chinese but you guys may want to hire a backup translator just in case THE DEMON gets your first one.