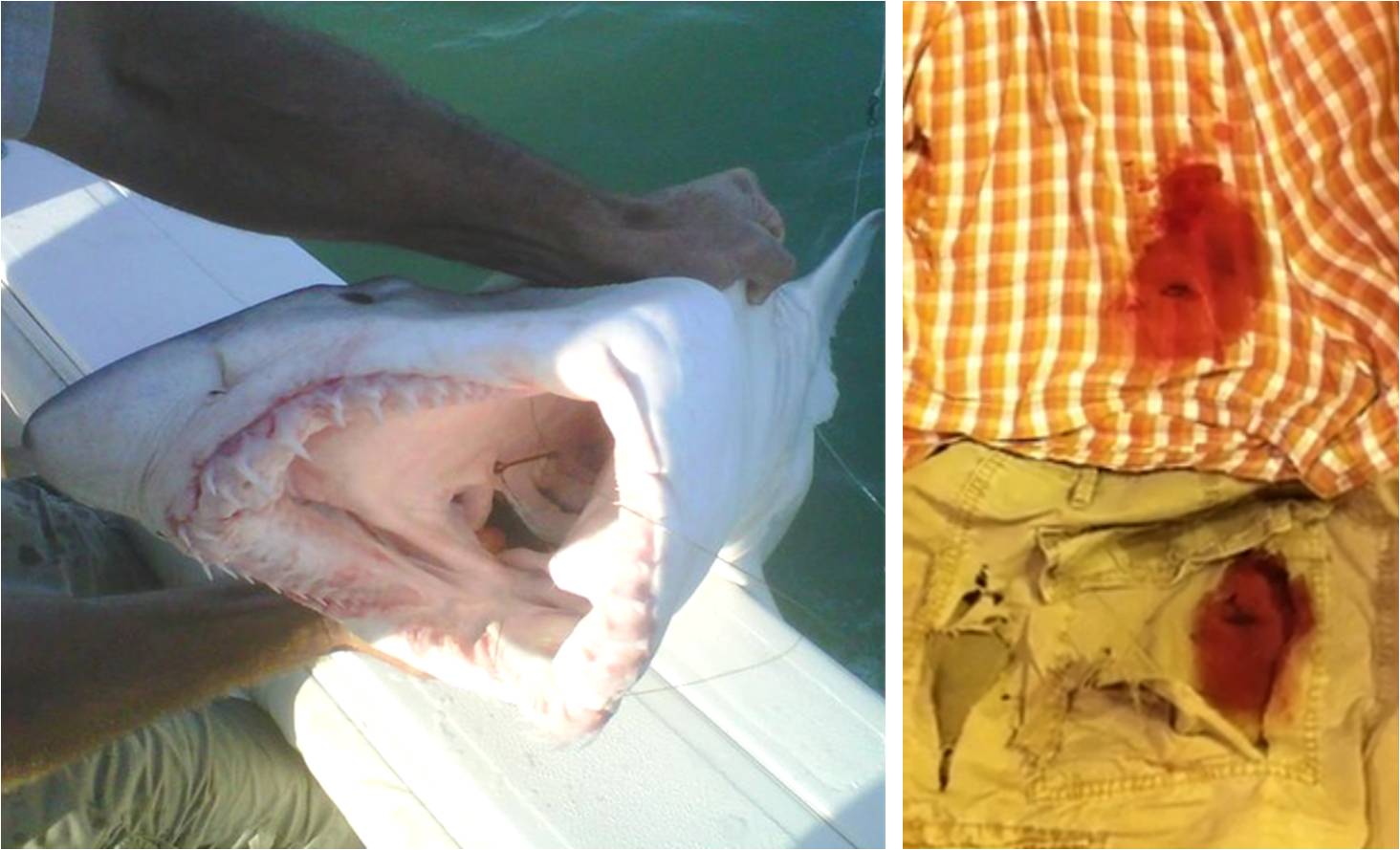 This was a evening shark trip out of Cocoa Beach, Florida a few years ago. This night ended up being one night that me and my a## would never forget! I want to start off by saying that I am always very careful with bringing sharks on board the boats. As a captain, I  put myself at more risk since I lift the shark, and I always take great care to keep my customers safe.  Don’t let this scare you from taking a shark trip with us! They are a ton of fun! Now, lets move on to the story…

I had a group of guys starting their night off with some shark fishing for their buddy’s bachelor party. We got all set up on the shark grounds and in about 30 minutes into it, the rod gets that heavy bend. The bachelor is up to bat and he starts the battle. 20 minutes later we have a medium size sand tiger shark boat side. He was probably 6ft in length but not real fat. If you don’t know what a sand tiger looks like, its the one with long narrow teeth protruding out of his face in dire need of a good dentist. They want a picture with the shark in the boat and he was just small enough I thought I could safely handle him. Boy, was I wrong! I grab the shark and drag him over the rail like always. He’s too big to hold so I have him on the deck posing and all is good. The bachelor kneels down behind the shark and it starts going crazy. The bachelor jumps up on the boat gunnel to keep his feet safe. I go for the shark to pin it down. As I was going down the shark was coming up. I turned to retreat as the shark comes down mouth open landing on my left butt cheek. It felt like my butt was on fire! The shark is hanging mouth still open with only the top set of teeth lodged into my shorts, boxers and yes my butt cheek. I’m yelling “he-is-on-my-a##!!! … he.is.on.my.a##!!! … HE IS ON MY A##!!!” I start telling the guys in a rather rushed voice that they need to grab this shark by the nose and lift up. Meanwhile, these guys are looking at me like I am speaking Chinese. After a moment, one guy does come to the rescue and lifts the nose. I quickly throw the shark back in the water while my bloody butt cheek is gushing and my shorts look like I had a run in with Freddy Kruger. Luckily enough it was only 1 tooth that dug into the skin and left me with a 1 inch gash somewhat deep.  After we caught a few other sharks and returned to the dock I ask the fellas what they had planned for the rest of the night. They said “Nothing, how do we top that?” I thought about going to the ER and getting my butt stitched but I decided against it. I kept thinking about explaining what happened to the hospital staff… “What happened sir?” “I got bit by a shark.” “Ya’ okay!”