Go For It All

This story goes back to the days me and Captain Stan worked together on the party boat (as deck hands) out of Cape Canaveral. The way it worked back then was if we had 15 customers or less on the boat two deck hands weren’t needed. We would just take turns at that point on fishing stops. I would work the deck while he fished and visa- versa. At the end of the day we would split the days pay, tips and money we made from the fish we caught.

It was my turn at the rail to fish. I drop the bait rig down and feel a bait or 2 on it. As I am reeling it up a nice 40lb cobia is following . I yell out STANLEY as I am hooking the small b-liner I just caught on the bait rig to my spinning rod. The b-liner does his job perfectly and swims for the bottom. “Bam!” I feel my bait get engulfed. Stan is already beside me with the gaff ready because he knows by the tone in my voice something was about to happen.

I set the hook and the fish does the classic cobia fight. A hard powerful but short run for the bottom followed by a slow but steady rise to the surface. The fish pops up maybe 20 feet from the boat but this time he had a buddy, about a 30lb cobia following him. The fish I have hooked comes to the boat but he is a little deep to gaff. Stan ask me, should I go for the other one or just get yours? I answer go for it all!

Meanwhile there is 2 cobia absolutely clearing the deck. Customers are jumping out of the way and bait buckets are getting hit and slung everywhere. Blood and guts flying as these 2 cobia are flopping and going crazy down the narrow deck. We have Captain Dan upstairs yelling at us all pissed off. Get a F******g bat he yells.

We then quickly get the 2 fish under control and in the ice box grinning and giggling like school girls the entire time. I now realize why the captain was pissed. Out of 15 customers the only 2 good fish caught that day were by the crew. I am sure that was complaint city for him, but we were young and that’s the way it worked back then.

To this day when me and Stan get to fish together it is a unspoken rule that we go for it all. In all reality we carry this mentality over to our daily charter fishing trips.

I had a trip not to long ago with a a husband and wife on a afternoon half day charter. They were a little older but very capable. The wife was reeling in a small king when a pack of cobia followed it up. I still had the short bait out so I quickly reeled it to the boat and the biggest cobia of the bunch got to it first (rarely does the biggest one get to the bait first). I handed the rod to the guy and instructed him to fight it nice and easy just like the kings. Big cobia’s on stinger rigs are not ideal, but I will never complain about having a nice cobia hooked up.

I grabbed the spinning rod and hooked up a 15lb cobia, jammed the rod she was holding with the small king into the rod holder while teaching her how to use this spinning reel. Keep in mind that I am running around this boat like a absolute crazy man and this I can only imagine it is very exciting, but may be overly intense for this couple. Once she has the hang of the spinning reel, I gaff the small king and put it in the box. She has made short work of the cobia and I gaff it.

She is super excited she got her fish. Now, her husband is yelling at me that his fish is right there, but in all honesty it is nowhere close enough to gaff. I get the jig out of the cobia we just caught and make another cast quickly hooking up about a 20lb cobia. There is still one more  cobia following his big one. I have another rod with just a hook and a live bait but I can’t seem to get the other cobia to see it.

She is now fighting her second cobia, he is still fighting his, and I’m trying to hook up this last fish. His fish is a nice one, right at 40lbs. She now has her 20lb fish boat side and I hit him with the gaff and throw him in the box. I’m trying to get the jig out of the cobia we just caughtj, and his fish is now getting within gaff range. The man is exhausted, yelling “its right here” and I tell him “hang on I’m going for it all!”

I get the jig free and try to entice the other cobia but he’s not having it. I put another live pogy on the rod with the plain hook. The guys saying just get this one, but his fish has made another run back out of gaff range. I pitch the live bait behind his fish and this time the other one does see it and quickly inhales the bait. I have the fish hooked up but the wife is spent and she is not getting up from her seat to fight another fish. I’m now fighting this cobia and coaching the guy to just stay patient and not to horse the fish but I can tell he is over it and drained of all energy.

I quickly tame the one I’m fighting and gaff them “another 20lb fish.” I’m helping the guy stay calm and keep the easy pressure that’s needed while fighting a cobia on a stinger rig. His fish comes back into gaff range. I stick him and put the 4th cobia on ice. Again I’m hootin and hollering yelling  “ya that’s why you go for it all” The guy looks at me stone cold and says “you should have got it the first time” and “is the damn thing even kosher?” All I can reply with is “you just have to go for it all.”

After a few minutes they both have their energy back, but I still don’t think he was as excited as I was to catch 4 nice cobia in about 30 minutes. We ended up catching 2 or 3 more king mackerel making for a great afternoon half day with 4 cobia and 4 king mackerel. We got back to the dock and took pictures. I filet 4 king mackerel and 1 cobia for him to give to his neighbor. I guess the cobia was deemed not to be kosher so I ended up with 3 nice cobia, which happens to be one of my family’s favorite fish to eat. One thing my charters can always expect from me,  I always do everything in my power to pull the most fish over the rail for my charters. My daily goal is to give my charters an experience of a lifetime… so I always “go for it all”! 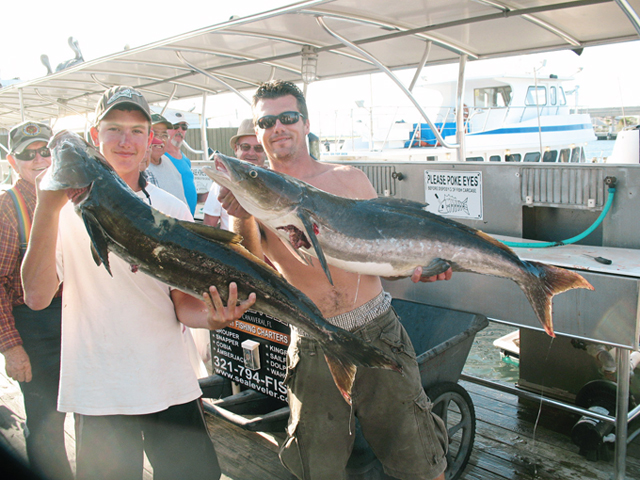 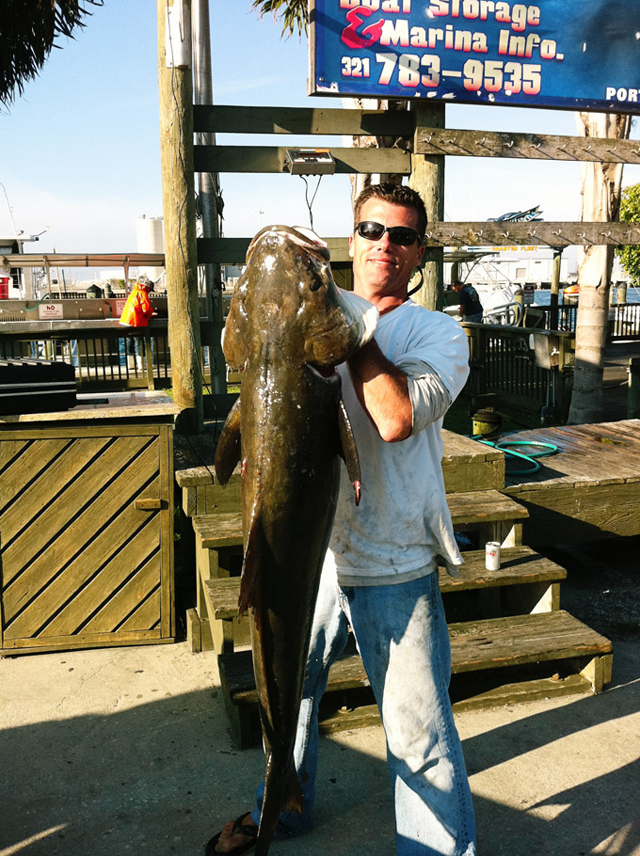 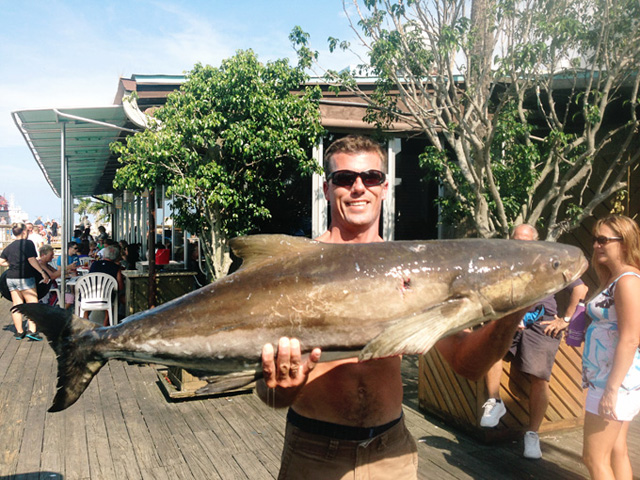 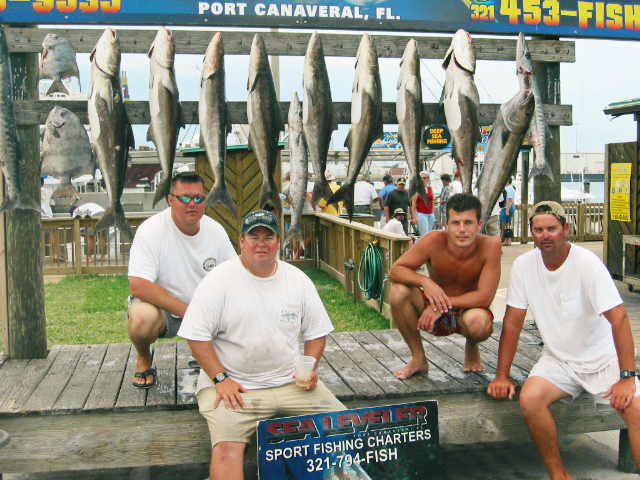