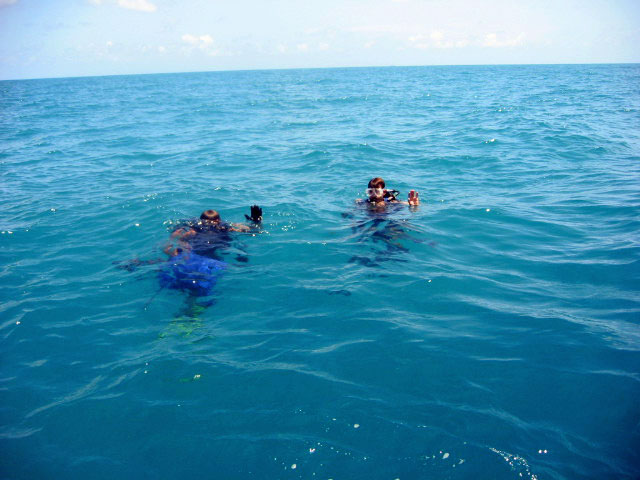 At one time I had grand illusions of being a commercial diver. My first couple attempts should have been a indicator that I would completely fail on this endeavor.  The final straw about cost me more than I was willing to pay but that’s another story.

My first real dive trip I met up with Capt. Dan and Capt. Scotty at Sebastian Inlet to head offshore for the day. Capt Stan came along also but he had nor will he ever have any interest in getting into the water.

We meet Dan and Scott at the boat around 6 a.m. and these two whack-jobs are hooting and hollering, tilting up a handle of vodka and taking swigs directly from the bottle, and offering us some. We decline with a look of “holy crap, these guys are animals” look on our face.

We jump in Stan’s truck and follow these two clowns to the boat ramp. The entire time we are discussing if we should just bail on the trip… but man I am really pumped to dive and these guys know where to go. As we are launching the boat these guys are hitting the bottle of vodka again.

As we head out of Sebastian inlet it happens to be a strong outgoing tide and there is a small swell rolling in. If anyone knows Sebastian, they know it jacks up nasty in those conditions. It can be perfectly nice offshore but outgoing tide with a incoming swell equals a poop sandwich without bread. Dan looks at us and grabs the handle of Vodka and says “you  better tap this because its about to get ugly”. We decline once again and Capt. Scotty throttles up the boat. Just as we are about to clear the jetty we take one big wave over the front. Dive gear washes everywhere, me and Stan are completely soaked. Bottle still in hand, Dan and Scott are hooting and hollering tilting it back.

It was about a hour ride out to the first stop in about 90 ft of water and these guys are bombed. I want to dive but I don’t want these guys to kill themselves. They do this all the time and obviously make it back home again but pure vodka starting at 6a.m. is a little extreme, even for a fisherman.

Dan is gearing up because he is doing the first dive solo. Most of the time when we commercial dive it is solo. This way we can cover more ground. We also dive with power-heads. You don’t want to run the risk of your dive buddy swimming into the power-head accidentally.

Dan is fully geared up and says “hand me that bottle” I say dude do you really think that’s the best idea? Scotty hands the vodka over and Dan takes a huge swig, cringes up and yells “Oh ya, I need another!” Me and Stan are like “man you really shouldn’t dive, you are going to end up killing yourself!” Dan says “what, you don’t think I can handle it” and starts chugging again! At this point, all I can think is that this guy is going to die. Dan continues to guzzle and he now has vodka pouring down his chin, then lifts the bottle from his lips as it is pouring down his throat. Next, he is literally pouring it over his head. This guy is out of control! He looks at us and says “You want the last little bit of water left in this bottle?” Him and Scott are laughing hysterically at us. They got us hook, line & sinker! They should be actors because every drink was followed by a cringe and all the profanity that typically follows a stiff shot. These guys definitely got our goats!

Dan comes up from his dive with 5 or 6 lobster and a few mangrove snapper. I am super pumped, adrenaline flowing, excited like a kid on Christmas morning. Me and Scotty dive together without power-heads. We both have pole spears and a catch bag. We quickly loose each other on the bottom but I think we both felt pretty solid.  Visibility was about 25 ft. That is good for the waters off Port Canaveral and Sebastian Inlet. I shoot a couple sheep head and a trigger fish. I try to get a few lobsters but I fail miserably. I finally get one but I lost my catch bag and had to go back and find it. Of course when I try to put the lobster in the bag it gets away from me. I am floundering around down there like a big lummox. I literally have zero chance of any stealth.

I see this giant red grouper ahead of me. He has to be between 25 and 30 lbs. I decide I will shoot him with my pole spear and push him into the bottom. I shoot this grouper and he bends that pole spear around and tucks under this small ledge that you would never even think he could fit into. I’m kicking and trying to pull him out. My air is running low. I free the spear and blindly shoot it under the ledge a couple more times but I have so much dirt kicked up I cant see anything. I ended up loosing a flipper and my catch bag.

I surface and my head is pounding. Scotty had already surfaced and I’m telling these guys about this giant red grouper I just battled. Like I said my head is pounding. It feels like my skull is about to crack and my brain will ooze out. All I can do is take a t-shirt and wrap it tight around my head to hold my skull together. People say I skip breathe, hold my breath, adrenaline dump, mask squeeze, and that I need to switch to Nitrox. I don’t know but this headache would be a constant battle for me.

Dan decides to see if he can find this giant grouper and recover my lost gear. About 10 minutes later he return with a 13 lb red grouper and my lost flipper. Needless to say it was my grouper with about 37 holes in it and it is no where near 30 lbs. I will hear about this so called giant red  grouper for the rest of my life.

The day ends up pretty well. We have a good handful of lobster, grouper and snapper thanks to Dan and Scotty. We have a couple sheep head and trigger fish thanks to me. Icing on the cake was when we return to the dock we get checked by the FWC. We were totally legal except I was use to fishing on private charter abd party boats where I don’t need a fishing license. So ya a big fat ticket on top of my splitting headache.

It is good to be persistent with endeavors, projects, and hobbies.That being said, sometimes you should take life’s hints. I wish I would have taken the hint that commercial diving is not for me a long time before I did.