Now that winter is behind us and the water is warming up, I want to share some information about some of the most thrilling fishing that Florida has to offer… shark fishing! Shark fishing just off Cocoa Beach is pretty epic and our shark fishing trips provide us so many great stories. 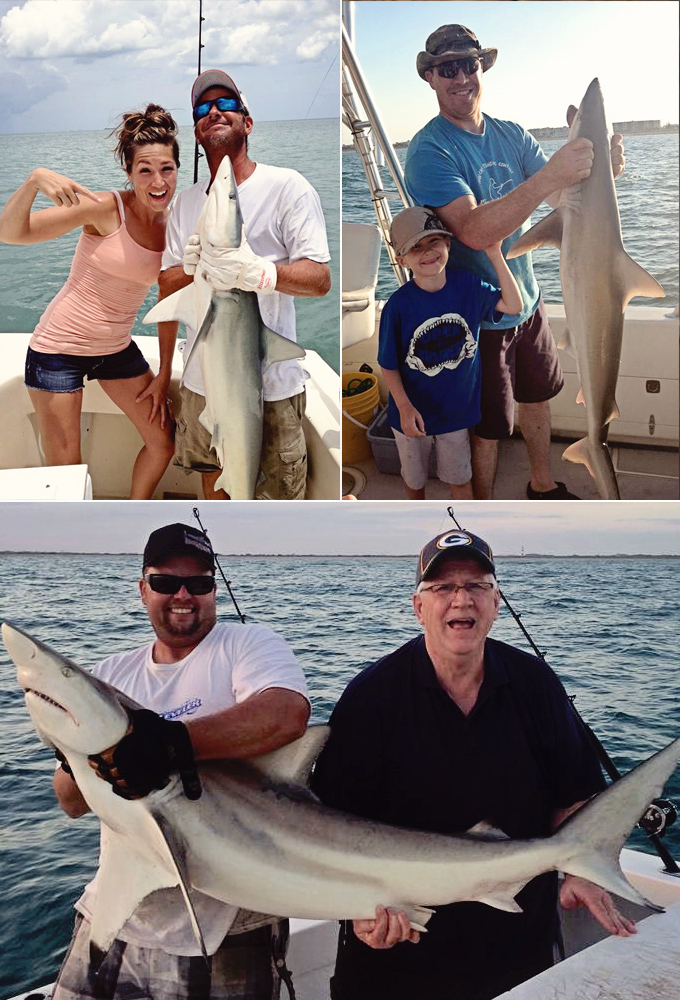 A few of the sharks we have caught near Cocoa Beach, Florida

Here is a little Sea Leveler history that have led to the shark fishing adventurers that we do today. Not to brag, but for all practical purpose we pioneered private charter shark fishing trips out of Port Canaveral. No, we weren’t the first people to ever try catching big sharks near Cocoa Beach, but through much trial and error, we perfected it.

Traditionally we learned to shark fish by anchoring up in 30 ft of water and dropping small baits such as sardines and squid. This style worked great for small sharks. Quite by accident, weather and sea conditions caused us to start shark fishing closer to the beach. And out of frustration of small fish eating our bait, we started to use much larger baits. All of a sudden we started hooking into sharks that our tackle at the time just wasn’t big enough to handle. After more trial and error using different hook sizes, line size and capacity, areas and proximity to the beach we now have Cocoa Beach shark fishing pretty well dialed in.

Some facts that may surprise most people:

1. Most of the time, the closer and shallower to the actual beach we get, the bigger and badder the sharks.

2. We have found that if you use chum, it actually has a negative impact where we shark fish because it attracts too many small blue fish and croakers that quickly eat the bait.

3. The largest shark we have gotten boat side is a 14 ft hammer head shark that we hooked in 5 feet of water. We know we have hooked bigger ones, but have never landed them.

4. Our area from Cocoa Beach to Daytona Beach accounts for the most shark bites to swimmers than anywhere else in the world. (Space Coast Daily)

5. In the past few years we have caught two of the most endangered sharks in the world, saw sharks. Both were absolute giants, weighing hundreds of pounds, and both swam away unharmed. We have a video of one of them on our youtube page here. For information about saw sharks, see this Florida Museum of History site.

Shark fishing is the most unpredictable of all the fishing we do. I have seen it change from as fast as you can catch them to not being able to get a bite in a hour. Shark fishing changes day to day and overall migration patterns fluctuate yearly depending on temperature and food source.

For family vacations, I can’t tell you how many times we have anchored up tight to Cocoa Beach and the adults kind of look at us very skeptical. They laugh and joke around about how they were just swimming further out than where we are shark fishing. Just about then the rod bends and the fight is on. We bring a 7 ft lemon shark boat side, snap pictures and let it go. Mom then realizes the family has been swimming with sharks. “That’s it no one is going swimming the rest of the vacation” I remember one little boys response. “ahh mom, shark fishing sux but it’s also sooo awesome!”

You never know what sharks and fish you might catch or how you may catch them. We had a big sand tiger shark hooked up one night but he managed to bust through the main line during the fight but just then the next rod doubled over. The swivel of the shark that was hooked up went right over the hook and bait of the other rod. What are the odds? The eye of a #1 swivel over the point of a 10/0 hook.

One night I was dragging a giant nurse shark through the transom door of our boat the Star Dust. These particular sharks don’t have much for teeth but they can sweep their tail like swinging a tree trunk. He hit the door and knocked it clean off the hinges into the water. What a scene that was. I’m dodging this shark while holding onto a 100 lb transom door directing everyone to the front of the boat because the weight has water rushing in. It was intense at the time but we managed to get everything taken care of and is now a great story.

Everyone wants to know what kind of sharks and fish we catch on shark trips. Below is a list from most common to least common.

Recently we have been catching a few sand bar sharks. I think this is a species that will start dominating our area and become a welcomed big shark to catch on our shark fishing adventures.