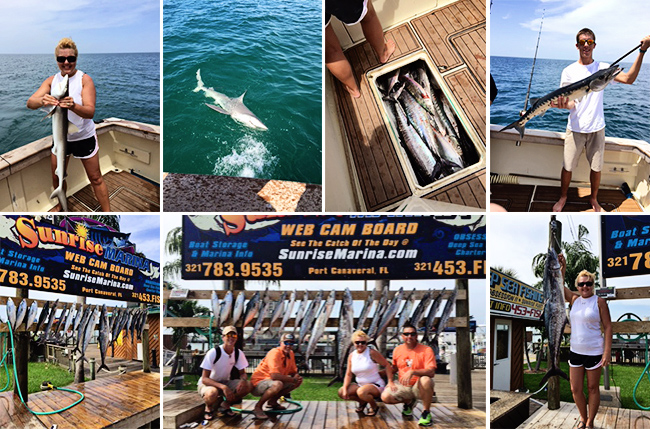 This is my first blog with a video to go with it, so check it out! Summer time is our busy season for fishing charters here in Cape Canaveral, Florida. I have been fishing just about everyday for 3 months straight and this has not allowed much time for me to blog. I figured a great way to get back into it would be to share one of my many exciting days of fishing during this summer fishing season of 2015.

This day started off like most… I met my customers for the day bright and early at 7 a.m. I went over some basic info and shared with them my game plan for the day. This was one of the rare days I had a deck hand with me, so Mike also introduces himself to the family. Great family – Mom, Dad and two teenage sons.

A big part of being a charter captain is reading your customers and relating to them. You also should know how to interact with them in order to make the overall great experience of fishing that much better. For example, if I have a group of guys out for a guys weekend of throwing back a few beers, talking smack, and just being guys, then I can jump in and start trash talking and help them get digs in at each other.

On the other end of the spectrum, when I get a family with young kids, its my job to make them feel safe, take time to get them comfortable, and coach them through the entire experience. When the kids are catching the first big fish of their lives, I pump it up and help them create a memory of a lifetime. Obviously I am always very respectful and watch my language at all times, but especially when woman and children are on board.

This particular family reminded me very much of my own family – outdoorsy, adventurous, tight nit with strong Christian values. Since I am a Christian myself, I noticed their WWJD bracelets and shirts representing their church. This detail adds character to the events of the day.

Immediately we catch a couple medium sized kings, a shark, and bonito. All the while, the son has the GoPro rolling. He even jumps in the water with the shark to film, like I said, this was an adventurous family! Now its the mom’s turn and her son is right there recording the event. Her fish makes a huge boil on the bait and makes a first run that almost spools the reel. She is fighting the fish like a champ, but she is getting tired and asks for the fighting belt. I personally do not like fighting belts because if you are not fighting a fish with the boat in constant forward motion the fish like to run under the boat and the belt does not allow you to react quickly enough to lean the rod into the water to clear the prop and running gear.

We catch our first glimpse of the fish off the starboard side and it is deep but even deep the fish looks big. I should note that for fun among the charter boats in our area, we have a monthly Captain’s tournament going on for biggest king mackerel. This fish is really big and I know it is a winning fish so my adrenaline spikes. Now the fight has me more involved and I am coaching her trying to keep her in the game and keep everything smooth. The fight is taking a long time and so many things can go wrong the longer the fight goes on, especially with sharks and barracudas that are always eager to get a free meal.

After what seems like forever, we have the fish starboard again. She has the rod in the belt and a extreme amount of tension on the line for this style of fishing. The rod is straight up and the fish only 10 ft straight down, I just know the line is going to break or hooks are going to pull. I am yelling at Mike to just dig and reach for the fish. Digging for a big fish like that is almost always a bad idea, but I just knew this was going to be our only shot. Mike listens and reaches deep for the fish and the gaff connects. The fish pins him to the gunnel for a second, then he has it about half way over the gunnel when disaster happens! The fish comes off the gaff and falls back into the water.  I yell “are you sh**ing me?” I go for the rod tip that is straight up in the air with the butt of the rod in the belt. I get to the tip of the rod just in time and push it down while getting the rod out of her hands and belt. This all happens very quickly and by some miracle the fish is still hooked up.

We manage to get everything cool calm and collected again. She has the rod back and in the belt. She is exhausted but we are encouraging her plus I am sure at this point she has some adrenaline firing. After just a minute or 2 the fish comes up off the stern of the boat and right into the prop and running gear!!!! I instantly throw the reel into free spool, Mike is helping keep light thumb pressure, and I am stripping down to my boxers. Over the side I go, the line is behind the rudder and one blade of the prop. It actually doesn’t fight me and I get it untangled on my first breath. I pull myself back into the boat and now the fish is far away because it has been in free spool for the last minute. I run into the cabin and quickly put my shorts back on so my wee wee doesn’t fall out of my boxers.

When I get back to action, I anxiously watch every inch of line she reels in.  As the frayed up line separates and holds together by a fiber, the fish pops up behind the boat once again after giving everything it had. The gaff sinks in and on the deck we have a giant king fish. Everyone is high-fiving and instantly replaying the events of this epic fight. I am replaying the events in my head thinking did I really just yell a 4 letter word and strip down to my skinny’s on top of running around the boat like a crazed maniac in front of this family?  Now, you have the story, here’s the video!

For the tournament, I’m guessing the fish is 45 pounds easy but on the radio I conservatively announce it is just over 40 pounds. I’m feeling pretty confident that this fish is a winner. Not 2 minutes later one of our other captains, Garren, announces he got one that is 50 pounds and another in the low 40s.

At this point I now know that my fish is not a winner. If Garren is saying 50 pounds, it will be at least 50 and probably more. The reason I am sure of this is because a few days earlier a Captain of another charter company announced he had just caught a 50 pounder. Well that captain’s fish barely tilted the scale at 30 pounds and the ball-busting he received and continues to receive will forever make everyone underestimate their catch.

Our fish was just over 47 pounds and that is a king fish of a life time for this family. The fight was epic and the story will be told for years to come. Captain Garren’s kings weighed in at 51 and 44 pounds and I am sure that is another story with a epic fight but it will be hard to top our story and we have Go Pro footage to prove it.

As a final note, I want to thank the Ludwyck family for choosing me for their fishing charter and sending me their GoPro video after they read the story! I hope our paths cross again one day as I really enjoyed our fishing trip together!